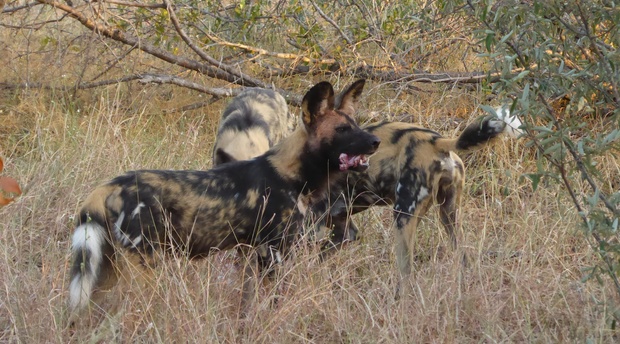 This Blog forms part of a number of short stories where wilderness experiences can be found. These short stories serve us that observing nature brings us closer to our Self and inspire us every day to live the life we want to live.

We were racing towards where we thought they were and we had no idea what they were up to and how long we would keep up with them.

The back-row guests were more somewhere mid-air with their bums than in their comfy seats but it was maybe a once-in-a-life opportunity to see one of the rarest animals in the African Bushveld; a pack of Wild Dogs, or Painted Wolfs as they were also called. There are only around 400 individuals left in the South African wilderness mainly due to loss of their extensive habitat and feral dog diseases which they had little defence against.

On arrival, we saw the guests of the other vehicle pointing in an Eastwards direction where the African sun was starting to show its first rays of sunshine on this cold winter morning. A white tail was just vanishing into the Savannah Bushveld and our hearts sank, we thought we just missed them. They were clearly on the move and all around us Impala where making their snorting alarm calls. We decided to drive around, this time a bit slower, to a road we thought they might be heading to and come out soon. We were lucky, the pack just caught an impala close by were we expected them, it was an impala ewe and they were already finishing the last bit’s, one was running around with the impala’s head while others were following it trying to take it away in a play-full way. Would they not have been busy feeding we would have never caught up with them.

What is so astonishing about a pack of wild dogs is that they are thriving most when they can travel and roam freely. Painted wolfs are always on the move. The only exception to this nomadic life-style is when they den and have their little wild dog cubs born. The pack will hang around the den area for a while, often around 4-5 months and then the pack is ready and on the move again with the new born generation of wild dogs amongst them. For us humans this nomadic life-style was not so long ago for millennia also the way we lived and survived. We were also moving on as food sources got depleted in the areas we stayed. Only the last two to three thousand years we decided to settle in villages, towns and cities and saw the need for a permanent house. This change of life-style has given us lots of advantages but the disadvantage is that we are so engulfed in our comfort zone that only in our vacation we get to see other places, faces and encounter new situations. This can happen for instance when we are on a vacation, in a place far away from the daily repetition we have forced ourselves into. To be happy and keep developing our selves we need these new horizons, new people and putting ourselves into new situations. Very much just like the travelling pack of painted wolfs. We need to breath new air for our mental survival and spiritual growth. Out of our comfort zone we will not always know where we will end up at the end of the day but we avoid clinging to a false sense of security and find wonder, fulfilment and happiness instead.

So, next time go to that place that you were always intrigued in seeing, say “hello” to that stranger smiling at you and eat that new unknown flavour of ice-cream or start small- maybe drive that route you never yet took to work...